How Do We Learn to Skateboard? 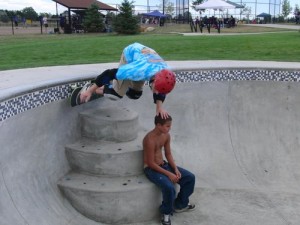 It’s true, for the most part, skateboarders in the past have learned by doing, and watching their friends. Trial and error has been the method of learning for skateboarders since the invention of the first skateboard. But just like the sport of skateboarding evolves and finds new supporters and new skateparks, the communities and recreation departments are growing and changing their attitudes towards skateboarding also. They are striving to support the kids in the community with programs that benefit them.

So what do kids who have a skatepark in their community want and need? An organized skateboard program needs to have two facets. One part of the program should use traditional lessons for the younger kids. From ages 5 or so, up to about 10 years old, skateboard kids thrive and learn in a structured environment with specific skills taught. The lessons can be one or two hours, and the focus is on safety first, then fun and learning. These lessons have the most similarity to other programs such as swimming or tennis. They can be skate camps that last for one day or more than one day in a row of one to three-hour hour sessions.

But as skateboarders grow older than 10 and into their teens, they have a desire and a need to feel more independent. Their programs, in order to be successful, need to reflect this desire for independence. For example, a 13 year old skateboarder wants to “session” the skatepark with his friends, and if there’s to be learning involved, the skater doesn’t want to participate in a traditional lesson format. They would rather just watch and try a new trick. The person they look up to is the good skateboarder, the one who’s better than they are at skateboarding. The most successful skateboard programs for teens are ones whose focus is just skating together, and travelling to other local skateparks if they are available. 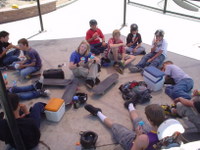 Skate Students in the shade

One of the great things about skateboarding is how it brings members of the community together. On any given day at a well-functioning and supported skatepark, you can see all age groups, from the 5 year old supervised by a parent, to the group of teenagers having their own skate session, to the older skaters who love the sport as much or more than the teens. In public recreation areas where there are other amenities such as baseball and soccer fields, playground, picnic areas, tennis courts, and indoor swim and workout areas, the skatepark tends to get the most traffic and use.

How the Skatepark Could Be

When you have scheduled programs with responsible coaches happening all summer and after school, your skatepark becomes a hub of community activity. Parents sit around and talk while they feel comfortable letting the younger kids use the park. At the same time, the park remains free of vandalism, and the negative influences that can gather there if it’s not used by the whole community. And, older kids tend to change their attitude toward the younger kids at the skatepark, respecting them and treating them as equals while at the skatepark. At other times, in school for instance, there tends to be divisions among age groups; skateboarding breaks those barriers and brings kids together in responsible ownership for a sport they love and the skatepark they use.

The older skateboarders who have grown up in a positive environment through skateboarding make the best coaches. Even if they haven’t taught a sport before, those that understand the motivations of skateboarders and how we learn, do a great job of creating the programs that become successful and grow. The best skateboard coach is one who has a desire to see the kids improve and have fun at the skatepark. If you watch during a session at the skatepark, you’ll see that these are the skaters who treat the younger skaters as equals at the skatepark. The older skaters who talk to the kids and skate with them, even though they haven’t met before, are the ones that make good coaches.

Find out more about the nature of a thriving skatepark community in the next in the series, “Skateboard Programs and Skatepark Stewardship.”

What you can find here